0643. Tent. In some managed forest in Pays-de-la-Loire, some 30km or so to the West of Le Mans. We thought that would be our destination for the day, and that, it being a large, well-known, glamorous city an’ all, we would stay with a Warmshowers’ host there. We contacted four from the contrived comfort of our hotel room yesterday and the day before, but to no avail thus far. To be honest,  I wasn’t that keen on jutting East just to see a city. Actually, it wasn’t the city so much as the jutting. Now, in the absence of any replies, we’ve decided to continue more directly Southwards, which excites me infinitely more.

From the maps, the terrain looks more varied and interesting – and just heading to a city? why? for the sake of it? just because it’s there? As destinations, cities just don’t hold any appeal right now. Yes, some may have beauty, some may have charm, some may have another aspect that makes them memorable, but most all are just conurbations built to serve a function; they don’t exist just to exist and lack that naïve quality that is maybe so beguiling about other more community-evolved settlements.

But where does, really? Either human or non-human, all developments and evolutions do so interdependently, and serve some function. And some develop this way; and some develop that way. And for some arbitrary subjectivity, this makes that one beautiful; that makes this one charming; the other makes it something else. Like with everything else, everything is what we make it to be: nothing has these qualities inherent in them. Qualities are perceived and invested with meaning by the beholder.

For me, a city’s just a city: bricks, cement, traffic, shops, people. They all have their own atmosphere, sure, and cannot be tarred with the same brush, but most exist to serve function rather than romance – and very few have developed with the bicycle in mind. They have veins of streets to pull the traffic in, out and through. Some do this more effectively than others; and some have managed to do this in a manner that allows a cyclist to meander and enjoy the city in the way that a pedestrian might, but many paths and roads exist just to get you from A to B as efficiently as existing infrastructure allows.

Many can be enjoyed, once you’re there and have planned an optimal route or followed a reliable instinct, but these, to me, for now, on this trip, are incidences of making the best, and taking the positives of everywhere, wherever we go:

But now we’re touring for real again, with no real aim except to enjoy the present and follow our hearts to who-knows-where-that-may-lead? And as we ride on the wave of beauty and pleasure that carried us through Normandy, Le Mans just seems to jut out that way: not part of the natural rhythm we’re on.

So, for all this pointless philosophising, conjecturing or whatever, we’re just going with the flow – our flow! I like that, and we like that. And, as the days progress, the pure simplicity of just riding, eating and riding, then finding a place to pitch our tent, is a joy built more and more on our own requirements.

From time to time, it’s nice to kick back, relax and refresh in a concrete shelter, but mainly we are bicycle tourers, where the most that comes between the winds and us are a couple of layers of nylon canvas, and we lay our heads amidst the sounds of the worlds we inhabit calling to and fro. That’s how we like it, and that’s how we love it. I guess it’s still a gilded cage, but it feels so much larger, with so much unexplored, with so much unknown, that the occasional comfort of familiarity that four walls may provide holds little temptation – at least, for the moment.

12:31. Alençon. 21ºC. Temperature’s shot up, the Sun’s out, and the clouds are scattered. Hopefully a nice day in prospect. Pissed it down during the night. Hopefully it pissed itself out and we’re not racing the same cloud that’s been around over the last three days.

As long as we get to keep most things dry by the time we camp and decamp, it’s not much of an issue. Nice to be able to strip off the extra top and bottom layer upon exiting a finely functional Ibis hotel: nice spacious room, great shower, great breakfast selection, very friendly and helpful staff. A toilet-brush would’ve been nice – Ew! – and we could’ve done without one guest persistently trying to toast the inappropriately shaped baguette in the toaster, and subsequently failing on a number of occasions, allowing us and fellow guests to breakfast in the fine atmosphere of burnt toast. He got there in the end, by maybe the fourth attempt. By which time I think he had a point to prove, both to himself and us fellow guests.

And now our journey South continues. Very shortly we’ll be leaving Normandy, which has captured all our senses so very much – the attack of pleasure upon them all that it is. Will all of France continue to cast such a spell? People say, “no,” but experience will tell – and we are looking forward to it, so…

Today we head for Sillé-le-Guillaume – 36k, and toward the tiny tiny village of Les Cassieres, which is less a destination than a direction, as it lies just beyond a forest or wood in which we’ll hopefully make camp.

“These are not unspoilt, unmanaged forests, but they are being managed very well, so the bits that are being, let’s say ‘unmanaged’ for the time being, or left to regrow, are left to their own devices, and look unspoilt, so, yeah, I’d say: ‘Very well managed.’ They seem to rip out carefully selected parts and use them for whatever, but then just leave the others to develop pretty much as maybe they have since time immemorial. Of course, there are the more familiar pine-tree forests, which, I would say, are not that native to these parts to be so ubiquitous, but there are still these really old-school looking forests, which are still pretty hostile and wild. So managed, yes, of course, but a balance appears to be being kept. It would seem France knows how to do these things.”

15:40. Plop! The fish are feeding. The dragonfly are acrobaticking. The island spinney rests before us. France, you are yet to cease throwing up splendid surprises as we make our continuously merry way through you. 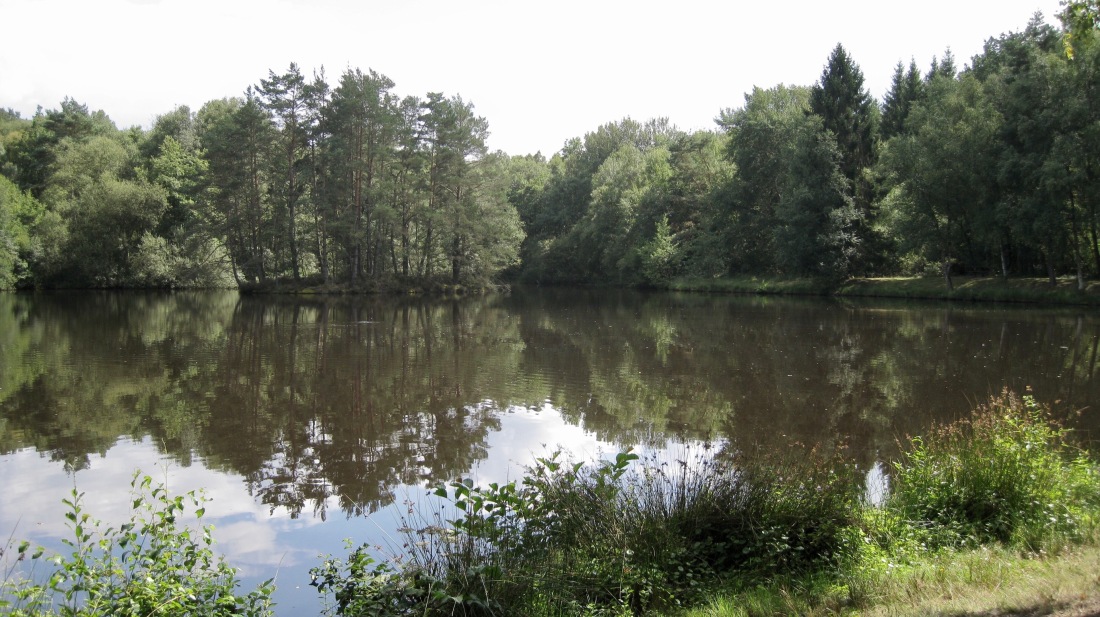 A little bit more ascending than descending today, but none has felt at all unpleasant. The extended downhills have been great, and the vistas at almost every turn of the head are the love of life. After descending out of Mont-Saint-Jean – yes, we had to ascend to get into it first – and pausing for a wee drink and an apple, before making our way to and through Sillé de Guillaume, to stop somewhere for dinner, before, again, making our way towards Les Cassieres and bed, we climbed amongst some beautiful unspoilt-looking forest.

As Agnieszka put it to herself (she thought)
as we rounded a corner.

What a spot! I’d say: “What a find!’ but I now think that France has plotted all these things for us, on a special mission to leave us with a magical impression and destroy any negative preconceptions an indoctrinated English person may care to have. If it has done so to such cynical ends, I thank you, anyway. If it hasn’t, which, of course, I truly believe to be the case, then, “thank you, again.” It really is a pleasure getting to know you.

And, as we have exited Normandy and entered Pays-de-la-Loire, what else does this country have in store?

The nature and everything: nothing feels off limits. It’s like: it’s here, it’s there – enjoy it! Great, just great. That shouldn’t be the exception, as it is in many other places we have visited – and it isn’t here. Another reason to just be; and just be happy 😁