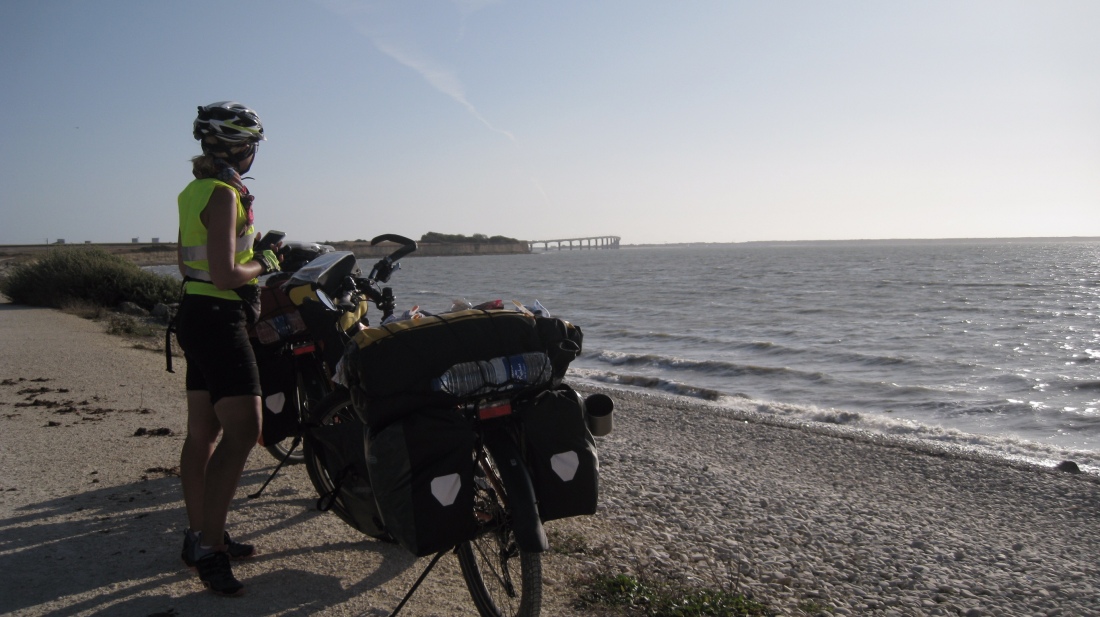 2150. In the tent. On the coast. You automatically feel like exclaiming: “We’ve made it!” And I’m sure that will be the tag accompanying a photo or two relating to today. It does, however, have a sounding of finality to it: a sense of destination reached – and we don’t really have a destination. Is there such a thing as a destination, anyway? There are landmarks and achievements, but nothing really stops – ever. Even when we reach a stage where we’re not conscious of moving, we will be – on some level. Even when others see us as no more than atoms and cells and molecules, we will still be journeying on: our voices and actions reverberating somewhere, spreading ever further. We may not be conscious, in the traditionally accepted sense, of this continuous dispersal, but a bundle of experiences that became conveniently labelled ‘we’ will be out there, living their own conscious lives, experiencing their own experiences, being experienced, and becoming further experiences; only detached from this frame, so they can no longer be acknowledged and claimed by this thing called ‘I’.

But, we’ve made it to the sea; well, the ocean – as Agnieszka keeps reminding us both. And like meeting and crossing the Czech border, it does feel like some kind of landmark. Smiles beamed broader, spirits rose higher, and that selfie-stick came out for maybe only the second time – the other time being at that Czech border. And it felt spontaneously, unforcedly joyous, so who cares what it meant? or whether it should mean any particular thing? It meant what it did as it happened, for no other reason than it did; and if that was a cliché, then there’s a reason that clichés exist.

And it did crown a wonderful day. A chilled get up in a place you’d never sell as an idyllic overnight stop in a holiday brochure, but which turned out to be a beautiful peaceful place to wake up in, take it easy, breakfast, chat, stretch, and ease into the day while the heavily condensated camping gear dried out. Then a fabulous ride through the flat marshlands of sand reclaimed from the sea, which make up this part of France. Distant distant horizons, lovely weather, the synchronised surfacing fish posse: a natural wonder I will never forget, a man named Geoff, a dog named beautiful, a beaver beavering, some nature reserves of storks, the falcons, the buzzards, the dinner by the road – then we meet the coast as our day’s riding draws to an close.

Using that word a lot this Summer. Lazy writing? Limited vocabulary? Perhaps, but it seems the aptest in my book, so what’s the point of using others? That’d be like using socks as gloves because you felt you were overusing the gloves. Oh, the socks may serve some glovely function, but the fit wouldn’t quite be right, and there’d be a sense of discomfort whenever you wore them.

12:40. A hyper Utile! More supplies. Near L’Aquillon (I think). Lovely chilled decamp. Am loving this sense of freedom from demands, needs or expectations other than our own; and we’re not really expecting that much; just going with our flows and responding to needs when they occur.

Yes, we do love it, but it is something that we’ve worked very hard for; and is something that requires constant work. We love it because we more consciously chose to do this than maybe any of the other choices made in our previous lives, but that doesn’t make it easy – though it does (if that makes sense).

We accept the difficulties because we have chosen them as part of our lives – and the benefits and freedoms arising out of living largely to your own rhythms outweigh any of them by a considerable margin; and in relation to our other lives, make them not that difficult at all; although this appears to be the default setting visible to most or many, and an unfathomable lifestyle choice, going by reactions we encounter along the way. 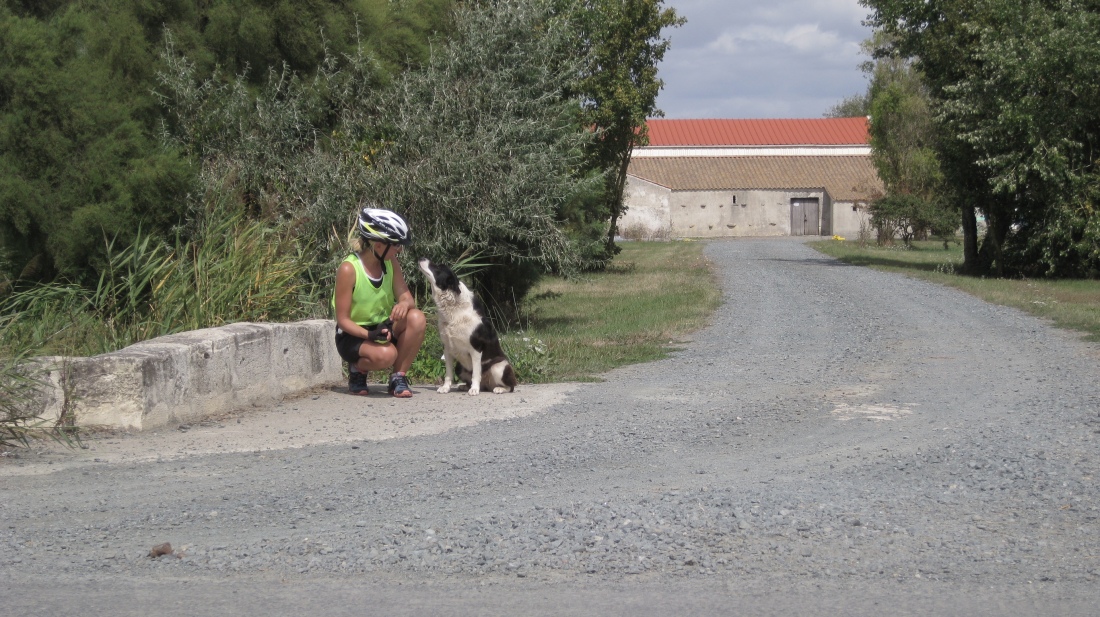 Though many outside the age of certain lifestyle choices betray a more genuine feeling akin to our own: “Cool!” 😀

Where some see deserts, some see life thriving in the cracks in between – as it speaks of possibility for us all.

As we made our way along the much-longer-than-it-appeared-on-our-mapping-application D747, our in-union-with-our-sense-of-self-within-the-world-around-us was torn asunder, as every crevice of calm was assailed and invaded by the monotone roar of machines belligerently missioning from there to there, regardless and heedless, oblivious and dangerous – to life.

To all life,
That is all.

Cars, cars, and more cars, and trucks, and lorries, and camper-vans, and caravans, and engines, and wheels, rowing and rolling and pushing, racing, bursting great holes through the fabric eternal; no longer eternal, but victim to the cold caprice of disinterested cogs in the wheels that steal anything life.

Finally, we got off the main thoroughfare of coastal dashers to enjoy the paths, lanes and trails running along the dikes threaded through this land once reclaimed from the sea.

Even here, though, sanctuary was shattered by the sound of holiday camps pumping manufactured enthusiasm through inadequate systems, creating that perfect sense of jarring disharmony you feel when something is out of synch with the Living World.

Camps where kids are sent for a fortnight of enforced frivolity and fun-by-numbers, which must be fun for some – but is clearly none for some.

Other words announce themselves as I reflect upon yesterday.

Again, two words that hadn’t applied to our French sojourn so far.

We exited the marshland and continued along a lonely lane, tailwinds enthusiastically assisting us along our way.

lost in a breeze

Well, not lost, but off track,

so we had to re-route

Caravan parks to the left of me. Caravan parks to the right. No-one allowed in or out. Concentration camps of conformity, where fun is synthesised down to its lowest common denominator and mass-produced on cost-effective scales out of garish materials born not of this Natural World; and born never to return to it either.

Hollow sounds, which ring tragic in the ear, carrying within them the absence of feeling that fills a joyful expression announced of spontaneity and free-wills expressing themselves.

“We are on holiday.
We are here to have fun now.
And fun we shall have. Goddammit.”

And they are everywhere around the Le Tranche area. People farmed out here en masse, deprived of the money they have worked hard for, to spend on this idea they have bought into, which seems to rob most all of their dignity and virtue, as they are subject to bombardment by the slightly off-colour, slightly out-of-tune, not-quite-the-same-tasting world; where individuality is quashed and a human becomes a mob; where frustration is released through enforced hilarity; where cries are released as alcohol numbs; infusing these simulacra of happiness with strains of terror, of anger, frustration and anguish, and a self-consciousness that this is a situation not really born of one’s own desires, but of choices made by another – and not really for your own benefit.

And it saddens me.
And it’s tragic.
And it’s sad.

which is why I’m here, and not over there,
where we all are

Who am I
the judge?

12:20. Another large E.Leclerc in La Roche-sur-Yon, to the South of the city this time, as that’s the direction we’re headed, but it’s still massive! Bit of a ridiculous size for us to do our shopping for the day, but it was exactly on the way, with little inspiring us to deviate – in this weather.

Temperature’s pleasant enough – 21º – so the bare minimum of layers is possible under the proving-ever-so-useful poncho, which will enable us to dry out more quickly when the rain does cease. 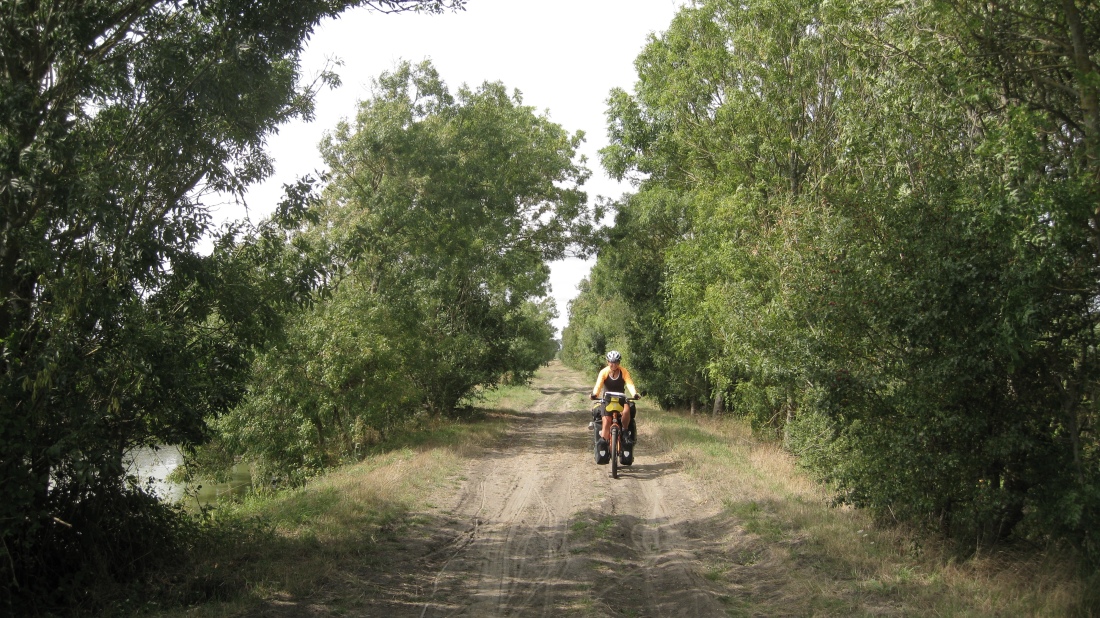 Our second point of call today will take us to La Tranche-sur-Mer, and a campsite there to meet a guy, Robert, who’s going to give me a hand with, and a second opinion on, tuning my front derailleur – thanks for putting us in touch, Sue.

I’ve been given a great step-by-step by the ever-supportive Rob from Rob’s Bikecenter, but it’ll be nice to have access to a stand and some more tools should I discover something unexpected.

It’s also a lovely ride to and along the coast there, and doesn’t add any k to our way, in terms of Bordeaux, so why the hell not make contact with another kindly soul?

And, from his last text, I get the impression the weather’s going to pick up.